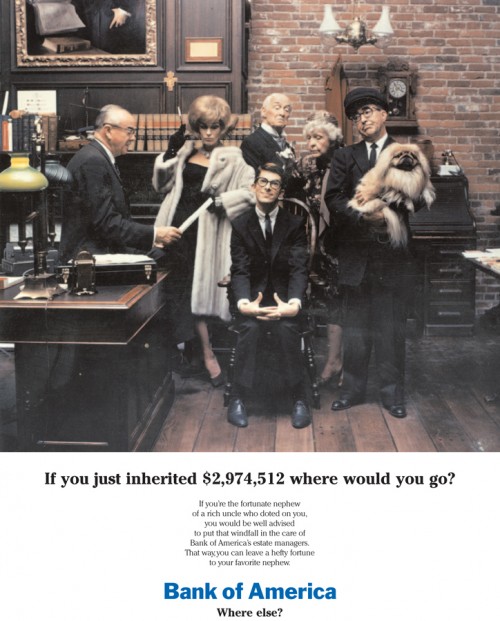 Here’s a little story about the creative process, back in the days when such a thing was possible.

One day in the 1960s Jack Allen and I were having one of our peri­odic, vinous, Friday lunches at Venetos, near his studio. After copious amounts of red wine, I mentioned the agency’s (Johnson & Lewis) urgent need to come up with a savings ad for Bank of America. our largest client.
Savings ads were noto­ri­ously and inher­ently boring, but I had the glim­mering of an idea.

Ad: ​“Jack, what if we had the reading of a will, with all the rich uncle’s house­hold gath­ered in the lawyer’s office? Maybe we could use Belli’s office.”

Between us, we came up with the cast:
The lawyer: Wally Brazeal, an ad rep, perched on the edge of Belli’s desk, looking lawyerly.
The widow: a very proper older model from Ann Demeter’s agency, with lorgnette and fox fur.
The heir: A young nephew, played by Tom Rice, an art student, in preppy horn rims.
The butler: Mr. Lancaster, formerly of the French Opera Company, tall, white haired elderly gent in full butler’s regalia.
The chauf­feur: Homer Welch in proper livery, carrying the widow’s Pekinese dog.
The mistress: Pat Mahan, model from Al Duartís agency, ravish­ingly sexy in bouf­fant blond wig, black dress, pearls, cigaret holder, and a fabu­lous fur from Roberts Brothers.
Everyone except the lawyer and the heir looked pissed off, including the Pekinese.

The heir was beaming, he was getting the money!
When we called to get permis­sion to use his office, Belli was enthusiastic.
We sched­uled the shoot for Saturday morning, the next day. Milt Halber­stadt signed on as lighting consul­tant. Belli came with his infant son, Caesar.
The shoot went well. We got the film rushed to processing. We took Pat, still in char­acter, to the Temple Bar where a boyfriend tended bar. He didn’t recog­nize her at first.

Sunday I wrote the copy.
Monday morning I sent out for a rush C‑print and spec­i­fied the type. Monday after­noon, I pasted up of the finished comp.

He did and presented it to Charlie Stuart, BofA vice pres­i­dent for advertising.
Charlie loved it. (Thank God!)
It ran a long time, won an award in the L.A. Art Director’s show, and I think everyone got paid.
Ad Taylor